Ah, Mexico. Although I only spent 10 days here backpacking from San Cristobal to Chetumal, I feel like I know it well! I definitely want to return one day and see a lot more of the country (and eat a lot more street food).

As with my previous posts for El Salvador, Honduras and Guatemala here are ten sights I got used to seeing everywhere…

A really really popular car here. I couldn’t resist whipping out my camera every time I found another one. From beaten up husks held together by rust, to deluxe super shiny versions, they certainly brighten up the streets. 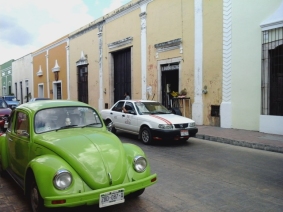 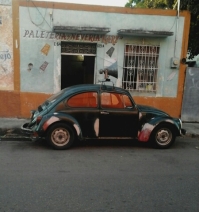 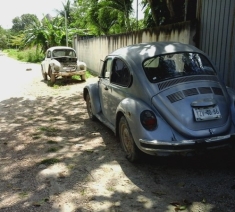 The absolute best Mexican street food dessert. It’s a crepe made fresh in front of you in a cast iron grill pan. Choose your fillings from an array of fruits, syrups and jams. It’s then rolled up and goes all crispy on the outside. The twist however, is that the locals choose grated Edam cheese (queso de bola) with Nutella. Yes, that’s right, cheese with chocolate! I went for another local favourite – cheese with caramel sauce and it was delicious.

Underground pools filled with inviting waters, just waiting to be swum in. There was definitely some cenote one-upmanship going on among backpackers I met in Yucatan. It was a competition to either have visited the least known most remote cenote or to have visited more cenotes than the person you were talking to. Or failing that to have better photos. I failed on all counts, but I’m happy to say I swam in seven cenotes, none of them remote and got at least one decent photo.

Definitely my favourite meal using a tortilla. A quesadilla is so called because it has melted cheese (queso) inside, with a choice of meaty or veggie fillings. The large tortilla is heated on a comal, a large flat griddle, over coals outside the shop, the fillings added to one half, then its folded over. As simple as that!

Every Mexican city I went to or passed through on the bus appeared to have a central square with a church or two facing it. Most of them were gaily strung with colourful flags. At one church I was lucky enough to see three youngsters with their proud parents and assorted relatives, all dressed as if going to a wedding, receiving their first Holy Communion.

Real Mexican tacos have nothing to do with the boxed taco shells you buy in English supermarkets. Tacos here are small round soft tortillas with various toppings, often depending on regional specialities. They cone in threes and with a selection of salsas. The street carts usually specialise in one topping, such as Taco El Pastor (shawarma style meat), while a range of fillings are offered at small cafes, sometimes even a veggie option!

So. Many. Ruins. Yucatan is covered with them. To be honest if you’re not interested in ruins or beaches, then you’re probably in the wrong place. Chichen Itza is the famous one, but there’s loads of others in various sizes and with differing appeal. I learnt that the Mayan people don’t really like to be called that. There are around 200 different tribes, most can’t even understand each others language, and the first Spanish explorers gave them the collective name ‘Mayan’, as this was a local word used to describe people and places.

I had to include these, as I was just so surprised to see chain 7-11 style shops here, after the little tiendas which are common in the rest of Central America. There’s always several Oxxo shops in the main cities and at petrol stations. As well as every sugary beverage and snack under the sun, they sell cold beer, noodles, cups of coffee, hot dogs and doughnuts. They usually have a microwave, bench and stools, so you  can enjoy your beer and hot dog right there on the premises.

Of course I’m going to include beer in this list! While Sol and Corona are everywhere, I discovered Modelo Negro, a very nice dark beer. Those Oxxo shops are good for something! I also tried more than one craft beer along the way.

I’m sad to say I didn’t try a paleta until Valladolid. They are amazing homemade fruit ice pops sold, of course, in a paleteria shop. They can have a base of water or milk. I had a coconut one, with delicious chewy bits of real coconut, while waiting for the sound and light show to start in Valladolid. Later in San Pedro, Belize, I found a newsagents with a freezer of paletas, including peanut butter flavour which of course I couldn’t resist.