Being a shameless new country bagger, I decided to cross into Mexico from Guatemala, travel west to east through Chiapas and Yucatan states, then start my Belize adventure. The border crossing was dead easy from Huehuetenango in Guatemala – a chicken bus to the border, a shared taxi between immigration posts, a shuttle bus to Comitan, quick change then another shuttle bus to San Cris. However arriving from rural Guatemala into the modern city of San Cristobal de las Casas was quite a culture shock!

San Cristobal de las Casas – two nights
I was quite impressed with San Cris, although it seemed a little too clean and well maintained after the rough and readyness of Guatemala.  But it has to be said, with more stunning colonial buildings than you can shake a stick at, the town has a pretty big wow factor. I climbed two little hills at each end of the city, to find quaint colourful churches and great views of the town. The city centre is packed full of bars, cafes, boutiques, even a Starbucks, and the streets are spotlessly clean. My favourite find though was a relaxed local bar around the corner from my BnB, called Lxs Disidentes where I enjoyed a craft ale on both afternoons of my stay. 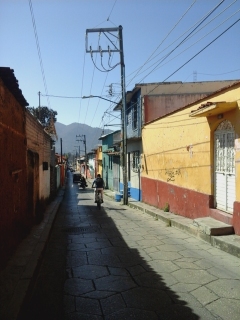 Palenque town and Mayan ruins – two nights
I then took an extremely expensive aircon bus to Palenque. The two other options were a couple of mini buses along the minor roads where several armed holdups have been taking place over the past year, or a guided tour via waterfalls and the ruins. I didn’t want to run into roadblocks nor did I want a guided tour of the ruins, so reluctantly and with a lot of grumpy muttering, the aircon bus it was.

The ruins were great though – I was third in line at the ticket office ten minutes before opening (in a bid to avoid the pesky tour buses) and by 8.15am I was on top of the Temple of the Cross, enjoying my granola and a fabulous view of the ancient palace with the jungle beyond. The ancient Maya city of Lakamha (meaning Big Water, named for the eight small rivers running through the site) was first occupied in 100 BC and lasted until AD 900. The impressive Temple of Inscriptions recounts 200 years of history in glyphic text. 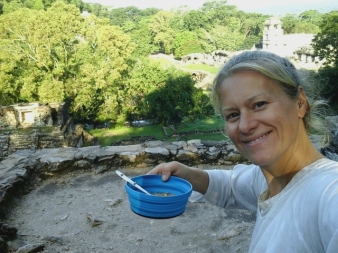 Merida and Progreso – two nights
Another eight hour expensive air con bus ride later and I was in Merida, a popular tourist town. I took a day trip to Progreso, a beach town which was deserted mid-week, where I hired a ‘bicicleta’ and rambled along sandy streets of empty beach houses to find my own patch of sand for a dip in the murky Gulf of Mexico.

I also discovered the joy of cenotes, paying a meagre 35 pesos for a boat ride into mangroves and entrance to four aboveground cenotes, which the Mayans called a gift from the Gods.  Yucatan is reknown for its cenotes, which are natural limestone caves or sinkholes fed by underground springs and apparently there’s thousands of them scattered around.

Before returning to Merida I treated myself to a marquesita from a street bicycle cart, which you find in most Mexican squares. It’s a crispy crepe cooked in front of you and filled with a choice of jams, syrups and fruits. Or you can do as the locals do and have grated Edam cheese with either Nutella or caramel condensed milk. I can confirm that cheese and caramel make a delicious filling for a crepe. 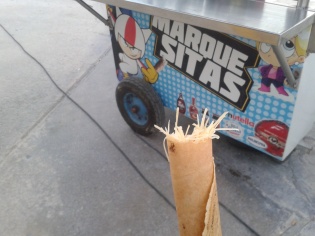 Izamal – one night
Just a short distance from Merida, Izamal is a famous ‘yellow town’, apparently painted almost totally in yellow when it was spruced up for a papal visit in 1993. It was built on top of an ancient Mayan city – the impressive convent elevated at the heart of todays city is actually built on top of a Mayan platform and to the north and south there are two existing Mayan stone pyramids that you can clamber up. I tried papadzules for the first time here – essentially tortillas filled with hardboiled eggs in a pumpkin seed sauce. They were delicious! 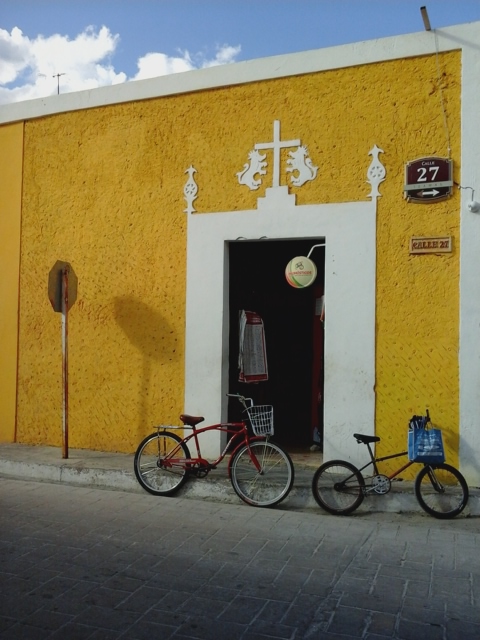 Valladolid – two nights
Although most people use Valladolid as a base for Chitzen Itza famous Mayan ruins, I’d had enough of ruins for a while and instead explored the local cenotes on an afternoon cycle trip, managing to see three quite different ones. Although they appear busy on first appearance, with tour buses and hire cars in the car park and the entrance lined with vendors, a lot of Mexicans don’t seem to swim, so the actual pools were very peaceful to have a dip in at each spot. My favourite was Zaci, right in the centre of town with an enormous pool and half open to the sky. 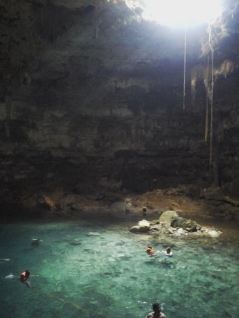 It’s known as the lagoon of seven colours, for its dramatic shades of blue created by its white limestone sandy bottom. I’m not sure I’ve ever  seen such stunning shades of azure blue, even in Thailand or the Maldives. I took a boat trip with a Swedish girl I met in the hostel. They last three hours and run continously, visiting five points on the lagoon. The best two are the living rocks or stromatalites at Cocalitos and the ankle-deep Pirates Canal which links the lagoon to the coast and allowed marauding pirates to ransack the town.

I really liked the lagoon and its town, even though it was a bit of a backpacker mecca. I stayed on the outskirts of town and there was a great swimming spot right on the lagoon. I had my last Mexican quesadilla here. I’m going to miss Mexican food –  it’s definitely been an adventure in street food!

Chetumal is right on the Belize border, just an hour from Bacalar, and I stopped here one night with the intention of getting a second class bus onwards to Corozal. Unfortunately it turns out Mexico won’t let the dodgy Belize buses across the border anymore, so the remaining options were a shuttle bus at 9am, an aircon bus at 2pm or a taxi to the border then pick up a Belize bus. All cost about the same price, so I chose the shuttle bus, which originated in Bacalar anyway! But still, I had a pleasant ramble around instantly forgettable Chetumal, getting very excited about three weeks in Belize, which after much counting on my fingers I worked out would be my 77th country.