Nestled in the jungle in the southern Toledo district of Belize, an area of Mayan villages and dirt tracks, next to Lubaatun ruins, is an three storey earthship. An earthship for those who don’t know (I didn’t) is a building made from recycled waste, such as bottles and tyres. Instead of using bricks, you simply build with cement and old bottles. This is Alisa and Richards brainchild, an English-Spanish couple who moved to Belize eight years ago, to find a piece of land to be self sufficient on and as Alisa said where there’s no planning permission! 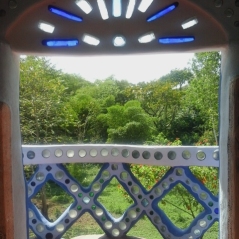 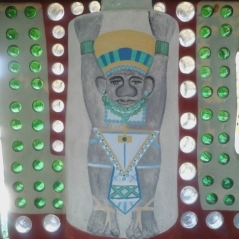 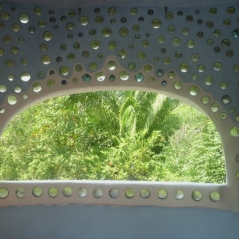 This was to be my final workaway volunteering stint of my Central America trip (and third after El Salvador and Guatemala). Workaway is a fantastic idea – an informal arrangement between hosts and volunteers, to offer around five hours of work a day in exchange for food and accommodation.

The earthship is a show piece (Alisa offers tours by donation) but there are several other buildings on the property, both thatched cabanas (in the traditional Mayan style) and one room cottages built using earthship principles. 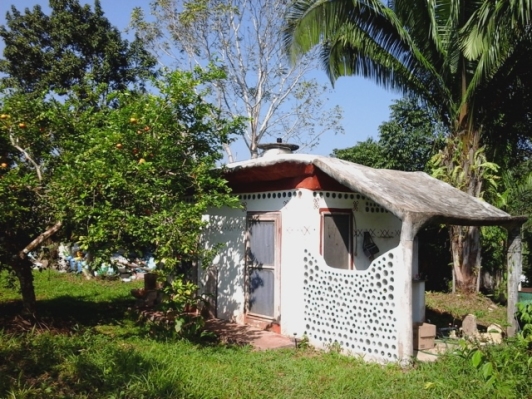 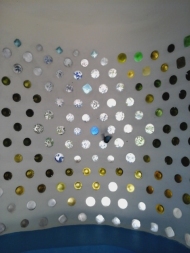 I love this style of living – sleeping in one building, then trudging across the dewy grass under a bright moon to the toilet block, or to the thatched cabana where the wifi was turned on once a day, or to the small used bottle store (colour coordinated!) to swing in the hammock in the breeze. The second floor of the earthship became my favourite afternoon chillout area, staying lovely and cool with its high cement ceiling and cooling stone floors.

All that sounds delightful, but I worked bloody hard too! And with the humid jungle conditions I’ve never sweated so much. A 6.30am breakfast each day, work til 11.30am then lunch and a hour chilltime. A couple of hours work again at 1pm, walk the dogs, quick shower then help prepare an early dinner. Okay, so perhaps this workaway is more than the usual five hours a day, but the work was varied and interesting, so I enjoyed it nonetheless.

And did I mention the butterflies yet? Alisa recently decided to diversify into butterfly production. This wasn’t mentioned on her workaway profile so I was pretty surprised when I arrived to spend my first day picking teeny tiny caterpillars off leaves and rehoming them in fresh storage boxes, having assumed I’d be carting bottles around or digging trenches. 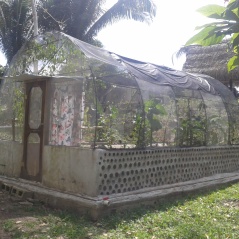 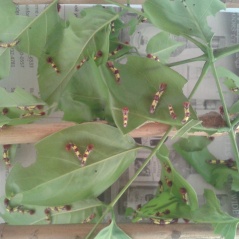 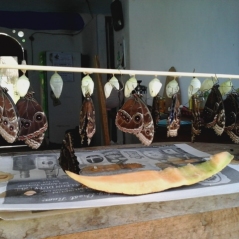 So, a quick guide to butterfly production – first butterflies lay eggs on leaves in the butterfly house. The leaves get moved into storage boxes where they hatch and become tiny caterpillars. Every couple of days the caterpillars need to be picked off the half eaten, poop covered withered leaves and rehomed in fresh boxes with new leaves. As they grow larger, they’re divided into more boxes. The large caterpillars later start spinning themselves into pupae, which is what gets sold, glued onto kebab sticks (around US $5 per stick). The idea is that the stick can be suspended, mimicking a cocoon hanging from a branch, allowing the butterfly to emerge dripping with goo. Most pupae is sold to local hotels or guesthouses who simply want to have pretty blue butterflies everywhere. 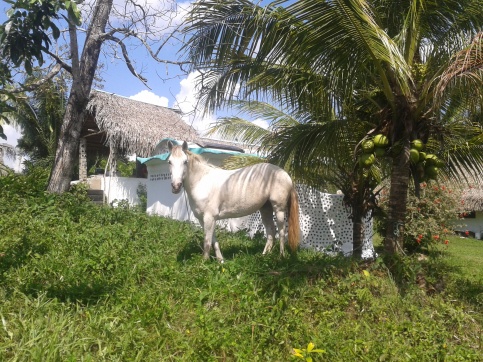 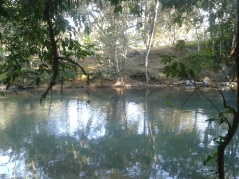 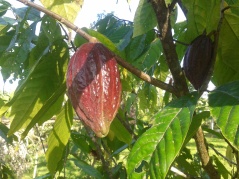 Wildlife spotting was awesome here. I saw my first tarantula; a tayra (a large glossy-haired dog like creature which can climb trees); humming birds; giant green iguanas; a rather large snake (not one of the many poisonous varieties though); a gigantic scorpion and a few small ones; glow-in the dark spiders; marching ants and these cool flying beetles that have a super bright flashing light in their rear end.

What a great place for my final Workaway! But now it’s time to catch a boat to Livingston, Guatemala. I’ve got eleven days to get back to El Salvador for my flight home.