A one month itinerary for backpacking Nepal

I’m lucky enough to travel the world every year for five months or so which means I’ve been to a lot of countries! I don’t really mind where I go as long as I haven’t been there before and that it’s affordable. I’m not rich – I work really hard during half the year, spend virtually nothing and plan my winter carefully.

So I thought I’d start a regular post thinking back over the trips I’ve done to try and inspire others to do the same. You too can be a backpacker at forty. Or fifty. Or thirty. Or whatever age you like!

I’m going to kick Tor’s Travel Tales off with a fairly simple one month backpacking trip in Nepal. I usually do longer trips but this was a special trip as I was joined by Paula, a friend who moved to New Zealand and who I don’t see as often as I’d like. Every few years we plan a trip together.

Why go backpacking in Nepal?

We love hiking and like to be able to do self-guided single day hikes and of course getting lost is half the fun. But we also like exploring as much of a country as possible and seeing a range of different landscapes. I’ve been to India and we’ve both been to Sri Lanka, so we were keen to see how Nepal differs.

We spent one month backpacking in Nepal, which was plenty of time to see a lot of the country and do some day hikes.

Historic Durbar Square, at the heart of Kath,mandu 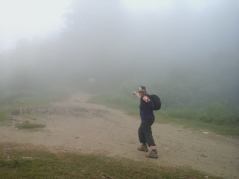 Getting very lost on the hike from Nagarkot to Dhulikhel

Admiring the view at Namobuddha Stupa

Two days in Kathmandu was enough for the delights of the capital city. We did so much walking – from historic Durbar Square, home to the Royal Family until the 19th century, to climbing up 365 steps (one for each day of the year) to reach Kathmandu’s most popular temple, Swayambhunath. Kathmandu lies in the centre of Nepal so we knew we’d be back through a few times before the trip was done.

From here we headed for Dhulikhel, 30 kilometres to the east. Trekking of course was high on the agenda and our first effort was a circular walk taking in temples and villages along the way to Namobuddha Stupa, a sacred Buddhist site, and definitely not getting lost at all!  We quickly discovered that all paths lead somewhere, usually into a someone’s back garden. We got into the habit of asking every person we saw on the trail if we were going in the right direction and many times were led by the hand back to a side-turning we’d mistaken as an animal trail.

We were really keen to do the day hike from Nargarkot to Dhulikhel, so we took a bus across the valley and stayed one night before starting the trek the following day. Various blogs suggested it was a fairly simple self-guided trek and that it was difficult to get lost. Of course we managed this within the first hour or so! We were always comfortable that we were headed in the right compass direction (thanks to GPS) but we definitely took a very roundabout way. A six hour route somehow turned into about nine. It was getting dark as we limped back into Dhulikhel.

The palace at the end of our Tansen hike

Next, it was back to Kathmandu to pick up a shuttle bus to Pokhara, a popular Nepal trekking town. This is a big backpacker hangout, situated as it is on a beautiful lake and also being the jumping-off point for the Annapurna Circuit multi-day hike. We spent a few days here then caught a bus to Tansen. The highlight here was another day hike through villages to Rani Mahal, a semi-derelict palace on the banks of the Kali Gandaki Rivera, with a rather cool swing bridge.

Our final stop before winding up back in Kathmandu was Chitwan National Park, where we were overjoyed to discover a rhino drinking from the river as we wandered around town on the first evening.

What to eat and drink in Nepal

We had some delicious meals, the best one definitely being the meal the guesthouse in Dhulikel saved for us after our trek across the valley. Curries and rice, particularly dhal bat, is popular in Nepal and if you’re not in a backpacker haunt, it’s usually what your guest house will offer. In many towns though we found plenty of the usual backpacker cafes.

At bus stations and along the streets there’s great street snacks from momos (small filled dumplings) to doughnuts, deep fried in front of your very eyes.  I had the best veggie samosas I’ve ever eaten from a lady making them at a stall outside a bus station on the way to Tansen.

I was also very happy to discover that everywhere offered porridge for breakfast. Banana porridge has to be the best breakfast ever. Or banana pancakes. Hmmm, now I can’t decide… A word of caution though, ask for no sugar unless you enjoy your porridge insanely sweet.

We found some nice guesthouses along the way. Our general logic is to head to the area where the guidebook says there’s a selection of places, have a look at a recommended one, usually find it’s triple the price and end up staying at the imitation one that’s sprung up across the road.

A schoolgirl on her way to class on Phewa lake

How did we travel?

As always we used local transport, simply walking to the bus station in Kathmandu and squeezing on a packed bus. We did pre-book an air-con shuttle bus to Pokhara though, as this was our longest journey and Paula likes her home comforts!

I have two favourite memories. The first was crossing Phewa lake in a row boat on our way to climb the World Peace Pagoda and being overtaken by a girl in school uniform kayaking to school. The second was singing Bon Jovi songs very loudly and very badly in the dark at the end of our epic Nagarkot to Dhulikel hike, in an effort to cheer up Paula who was very, very fed up.

New Tor’s Travel Tales are now live on the blog – find out how I bought a backpacker car in New Zealand and my month volunteering and travelling in Belize.