I’ve travelled all over the world as a solo female backpacker and never really thought twice about it. I’ve loved everywhere I’ve been. But of course, there are some locations that stand out over others.

As a solo traveller, or even when travelling with a friend, it’s important to keep your wits about you and take sensible precautions. For example, I love maps and always check out the area around my accommodation on Google Maps. Then I download screenshots of the area so I’m able to find my way back.

But I don’t let being a single female traveller stop me from going anywhere. In fact, I prefer travelling alone as I meet so many people along the way and get into so many conversations at bus stations and in local markets, that I probably wouldn’t if I was with a friend. I definitely tend to engage much more with my surroundings when I’m on my own – quite simply when you’re not chattering away, you become so much more aware of what’s happening in front of you! 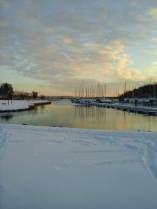 And to be completely honest, I don’t have any choice but to travel alone for the most part. I choose to work half the year and travel for the other half, and I’ve been doing so for over fifteen years now. My friends choose to have relatively normal lives and so can’t simply hop on a plane at a moments notice!

Backpacking through China by train

People often say to me ‘gosh, wasn’t China difficult to travel on your own?’ The answer is ‘definitely not!’ I met so many friendly people in China. I travelled at the same time as university holidays and as I moved around from city to city staying in backpacker hostels, I met countless Chinese students doing the same. At most hostels there was an in-house cafe meaning I could share tables with the students and chat with them. And they all want to practice their English!

The hostels were really well set up for foreign travellers. One hostel in Chengdu even had little slips of paper at Reception, printed with bus information for getting to sights around town such as the panda sanctuary. I simply followed the instructions and showed the slip of paper to the bus driver. Hey presto, I was at the panda sanctuary with no problems.

I took trains from city to city, then local buses out into the countryside. The trains were usually overnighters and everyone on them was welcoming. At the end of each carriage there are hot water boilers for making tea or noodles. And all over the cities there are 7-11s with instant noodles for microwave meals that you can heat up on the spot and eat sitting at a bench in the window. Perfect if you want a quick meal and to watch life go by.

New Zealand is a great starting place for female travelling newbies. It’s well set up for travellers, whether you want to buy a car (as I did) or travel on buses (independently or with a tour). It’s a good first introduction to hostel life – there’s both chain backpackers such as the YHA or BBH and boutique hostels dotted all over the country.

A great view from the Forgotten Highway

I’ve visited many times now. My first trip was a working holiday, lasting twelve months and I worked on both the North and South Island, living in hostels and having the time of my (very young) life. T BJhe last time I went was in 2017 when I bought a car and travelled the North Island for three months staying at freedom campsites and hiking, trail running and surfing most days. Have a look at my adventures in my Kiwi backpacking car here.

The country is perfectly set up for solo travel, with well-signposted short and long hikes, day trips for adventure junkies (from riverboarding in Queenstown to parachute jumping in Taupo), quirky sights such as Hobbiton, Lord of the Rings set and a hostel in every town.

Staying in Casas Particulares in Cuba

It was a long time ago now that I went to Cuba, probably in 2007. I think. And I’m sure a lot has changed but a recent blog I read said that Casas Particulares still exist and it was this unique form of accommodation that made my Cuba trip so special for me.

I arrived into Havana, staying a few days in a hotel near the Malecon or seafront. But a few days in the capital was enough – what I really wanted to do was to get out into the ‘real Cuba’ and so my odyssey of Casas Particulares began. Casas Particulares translates as private houses, and travellers pay to rent a room in a local family house or apartment and is the way to travel Cuba. In fact when I was in Cuba it was pretty much the only accommodation available outside of Havana and the touristy Varadero peninsula.

I simply caught a bus to Santa Clara, Che Guevara’s final resting place, and was greeted at the bus station by a few locals holding placards. I randomly chose one and off I went to their house.  From then on it was simple – that Casa owner recommended another in Trinidad who then met me at the bus station and so on, through Cuba.

It was great fun staying at the Casas. You got to converse with a real live Cuban family, eat home-cooked food (there was almost complete lack of restaurants or cafes in the places I visited), and sit out on the front doorstep every night watching street life go by (the national pastime).

I backpacked Bolivia as part of a wider five month tour around South America, taking in Chile, Peru and Argentina too. Bolivia was the highlight though, with a lovely blend of past traditions and modernity.  It was quite normal to see cholitas (indigenous local ladies) in brightly woven shawls, layered skirts and bowler hats walking the hills of La Paz.

My hand inside a 60 million-year-old dinosaur foot print, Sucre, Bolivia

5am at the hot pools, Salar de Uyuni, Bolivia 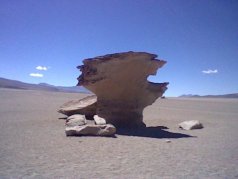 Although I backpacked most of Bolivia indepently I did sign up for a three day 4×4 tour of Salar Uyuni, surreal salt flats (and the worlds largest) that stretch for miles. The tour was great – six of us in jeep with a driver/guide bombing around a dried out prehistoric lake, dodging the many other jeeps full of tourists doing the same!

Being part of such a close-knit tour meant I  made friends to meet up with at later points in my travels.  I did an underground tour of Potosi silver mine (terrifying) with the Argentinian guy; then later met the Dutch guy in Sucre where we formed a small group, hired a guide and did a two day trek to see ancient dinosaur footprints in nearby rockfaces and I later bumped into the Danish guy in a Bolivian winery!

Belize is a great place for solo female travellers. Again it’s an English speaking country (officially, but many people speak Spanish or Creole as their first language).  It’s easy to get around as there are only a handful of roads, the main one being from the Mexican border in the north, to the Guatemala border in the south and a very simple and frequent bus system. Or, more excitingly, you can travel part of the way by boat, as I did.

The country is also well set up for day or half-tours, making it easy to meet people and be as sociable or as reclusive as you feel. I did a boat trip up the river to see Mayan ruins in Orange Walk, a snorkelling safari on Caye Caulker and a a fantastic adventure caving trip near Belmopan. Have a look at my blog post from Belize here to find out more.

Hiring a bicycle to go exploring is very easy – most hostels have a few to rent. On Caye Caulker you can even hire a golf buggy (the main mode of transport on the caye) and groups of travellers were teaming up to hire one and drive out to the ‘secret beach’. I hired a bicycle in a few different places and enjoyed cycling dirt tracks along the ocean finding beaches and small villages.

So don’t be put off if you need (or prefer) to travel alone. It’s the perfect chance to do exactly what you want with no compromising – go on, be selfish and indulge yourself! When you’re travelling it’s so easy to meet other people to spend short or long amounts of time with, but you’re not locked into a pre-agreed itinerary or having to make compromises. It’s also extremely empowering – the feeling of success of managing to get that bus ticket sorted or hiking that mountain or even just going to a cafe on your own for breakfast is amazing!