Design a site like this with WordPress.com
Get started
Skip to content
January 7, 2020January 7, 2020 Posted in Backpacking Destinations, Paraguay, South America, Uncategorized

We planned just one day in Asuncion to explore the historical centre and get a feel for the city. We took a five hour bus from Cuidad Del Este, enjoying great views of the  very flat, very green countryside.

Asunción is the capital of Paraguay, with a population of half a million, out of a total country population of 6.8 million. Apparently 65% are also under the age of 30.

We had a pleasant three hours wandering downtown Asunción, with a detour to admire the city beach on the ‘bahia de Asuncion’, a small inlet on the River Paraguay.

First stop was Plaza Uruguay, with the now defunct train station standing on its northern corner, dating from 1861. A rail service operated within Paraguay, mainly between Asunción and Encarnacion, for over 100 years, finally closing operations in 1999.

A few blocks away is a group of four separate plazas forming a pleasant area. Hotel Guarani, the first five star hotel of Paraguay, built in the 1960s, is on one side.

The moving Panteon De Los Heroes National pays homage to national heroes on the northern side. We had a brief browse in a souvenir market on the edge of the plaza, admiring the leather goods and the gorgeous Ñandutí lacework. Ñandutí means spider web in the Guarani language and it is tightly woven circular embroidery in bright colours.

Next stop was the cathedral, sadly closed up so we couldn’t go in to admire the golden altar and its Jesuit silver. Just up from the cathedral is el Cabildo, a former government building which housed parliament until 2004 but is now a cultural centre, and above there we found the Plaza des Armas.

From here there’s an enticing view down to the Costanera, the promenade and city beach that locals are so proud of. A few brave souls were swimming (I’m not sure how clean the water would be) while a speedboat towed a lone waterskier and a jet ski moved in slow circles.

I was excited to see stalls on the Costanera selling Terere, the national drink. Similar to the Argentinian yerba mate, but served cold, no self-respecting Paraguayan leaves the house without their thermos of ice and water, with a leather bound steel cup of Terere leaves, to sip throughout the day.

A glass of Terere 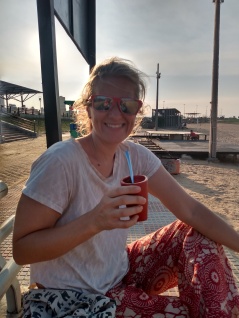 Enjoying my first taste of Terere 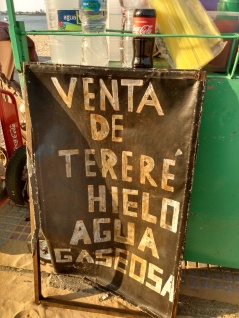 A good choice of beverages on sale at Asuncion beach stand

For one dollar (6,000 Guarani) I received my own thermos and cup, with stainless steel straw, and we sat on a bench to have our first taste. It tastes rather like bitter overbrewed tea, and while I wasn’t an immediate fan, I can see how it is probably very refreshing.

We stopped to get a photo of the giant Asunción letters at the back of the palace. These are thankfully the first giant letters I’ve seen on this trip. Last year I spent three months travelling in Central Americawhere colourful giant letters seem to be obligatory in every town.

Flying the Paraguay flag at the presidential palace

The neo-classical palace took over 100 years to complete and is an attractive yet imposing building. Atmospheric music played discreetly from speakers as we admired the quirky Christmas Tree and the impressive archways.

The city block in front of the palace is known as Manzana Rivera and contains nine historical buildings. Manzana means both apple and city block in Spanish, which confused me quite a bit!

The final stop on our whistle-stop walking tour of downtown Asuncion was Casa de Independencia. Independence House dates from 1772 and is the oldest standing building in the city. It’s made of adobe in a bamboo frame and thatched roof. 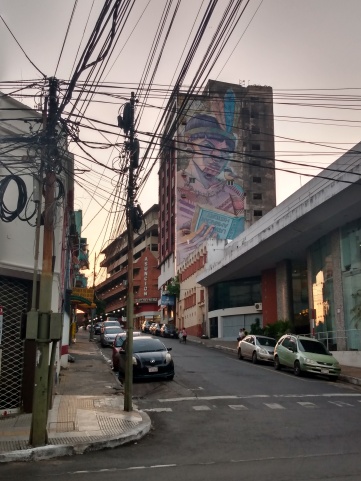 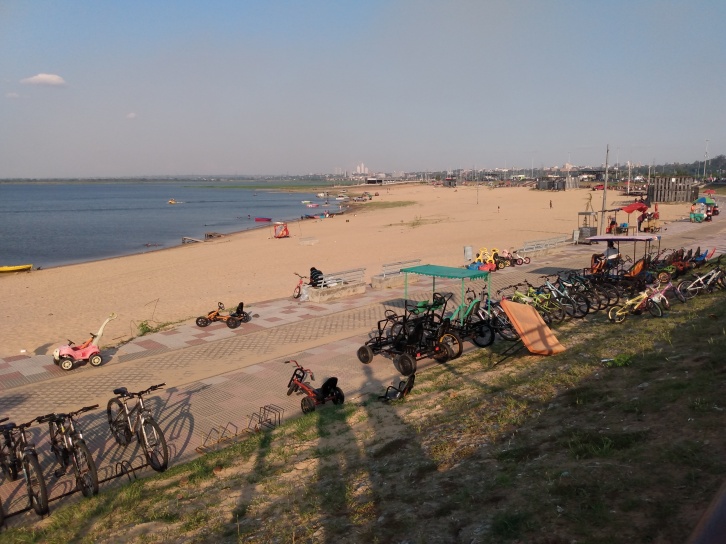 City beach in the Bay of Asunción

Heading back to the hostel along Calle Estrella as dusk blurred into nightfall, the lights of a few bars and coffee shops twinkled. I realised we hadn’t yet seen a single McDonalds, Starbucks or other chain fast-food place.

Back at Plaza de Los Heroes a couple of makeshift street bars were set up, offering a few spirits including Jaegermeister. We decided to see what the supermarket had to offer and picked up a couple of bottles of local beer Pilsen Roja to accompany our dinner.

We arrived into Asunción by bus from Cuidad Del Este, located on the border with Brazil. We’d spent a couple of days here after our Iguazu Falls adventure in Argentina. Read my post about visiting the immense Itaipu Dam and impressive Saltos del Monday waterfalls here.

The bus to Asuncion from Cuidad Del Este took five hours and cost 13 dollars. We arrived into the organised Terminal de Omnibus, where we picked up local bus 38 (2,400 Guarani) to the city centre.

We chose to stay close to the historical centre, as this was the main draw for our fleeting one night visit before travelling from Asuncion to Encarnacion the following day. 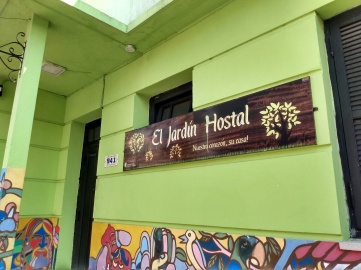 The area of Las Lomas where the Museum el Barro is located would have been another good option.

The El Jardin Hostal lived up to its name with a peaceful garden hidden behind the noisy street exterior. The shared dorm room had new mattresses and wasn’t overcrowded. Compared to other accommodation we’ve experienced, the shared kitchen was well equipped and we made a great veggie stew trying yet another of the various squashes the supermarkets are full of.

Check out my Instagram page here for more photos of my South American trip, as well as my UK vanlife.

One thought on “Asuncion, Paraguay – a walking tour of the historical centre and a flask of terere at the beach”