A one week itinerary for backpacking Paraguay

For backpackers visiting Iguazu Falls in Argentina, a trip over the border to Brazil and Paraguay is a must do. As British citizens there’s no requirement for pre-arrival visas – just an entry stamp at the border. It’s as easy as getting on a bus!

Paraguay is a landlocked country nestled above Argentina and sharing a border with Brazil. Having spent twenty hours on a bus from Buenos Aires to see Iguazu Falls in the north of Argentina, the easiest onward route without backtracking was through Paraguay.

Our five day Paraguay itinerary was quite simple – Cuidad Del Este to Asuncion, then Asuncion to Encarnacion. From here we crossed back into Argentina, and travelled from Posadas to Cordoba.

The currency is Guarani and there’s a staggering 6,200 Guarani to a dollar. Local bus trips were usually around 2,000 Guarani (50 cents) and a can of coke about 4,000 Guarani. Hostels were around US$ 10 per night.

Spanish and Guarani are both official languages of Paraguay. On most official buildings commemorations were in both languages and apparently 10 million residents speak Spanish as their second language. Recently a program was set up to teach government officials Guarani so they can more easily communicate with rural inhabitants. A bonus then for travellers is that Spanish is often spoken much slower in Paraguay than in surrounding countries and as such it’s far easier to understand locals.

Travelling by bus in Paraguay is easy. The city bus stations were well organised, often with a long distance and a short distance terminal next to each other. The ticket kiosks are arranged by bus company, with their destinations advertised.

We used NSA, Nuestra Señora de la Asuncion, for both our long-distance journeys. As in Argentina, they were double decker buses, where paying extra for downstairs gets you a wider seat and additional reclining ability. A five hour journey is 90,000 Guarani (about US10)

Look out for Chiperias. Chipas are the main Paraguay street food, sold by basket toting men and women on every street. Similar to a bread roll, coming in all shapes and sizes, it’s made of cassava flour and often has an aniseed taste although we also had a delicious cheesy version.

Empanadas for sale in Asunción

A delicious Chipa I bought on the bus to Asunción

Sopa Paraguaya is another national dish to look out for. This is a cornbread that accompanies meals. We had a picnic on the waterfront at Encarnacion, and picked up a salad, sopa Paraguaya and some beers at a local supermarket. What a great way to watch the sunset!

Empanadas are just as popular as a street food in Paraguay as they are in Argentina. These filled pastry snacks are similar to ‘pasties’ as we call them in England. The usual filling is ground beef or cheese, and occasionally there’ll be a vegetable version. The only difference between the Paraguay and Argentina empanada is that the first is fried and the second is baked. 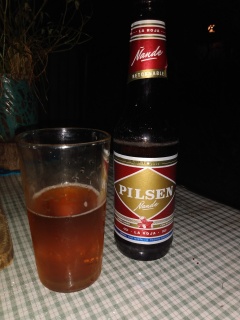 A glass of Terere

A good choice of beverages on sale at Asuncion beach stand

Terere is the national drink. It’s similar to yerba mate, a sort of hot tea that Argentinians are addicted to, except Paraguayans drink Terere cold. Every Paraguayan carries a thermos of ice cold water and an accompanying steel cup packed with Terere leaves to sip on throughout the day. A steel straw is used to filter out the leaves.

Have a look here at my comprehensive post on Cuidad Del Estes attractions.

Crossing the border from Brazil to Paraguay on New Years Day, we found a deserted downtown Cuidad Del Este. It surely isn’t normally like this as the city, the second largest in Paraguay, is a duty free shopping mecca. With locals from Brazil and Argentina having free access across the border for day trips, it’s no wonder the massive electronic stores are usually bustling.

We stayed a few kilometres out of the centre at the pleasant Hummingbird Hostel (and yes, we did see hummingbirds there) in a relaxed local area. It was the perfect base to visit the main attractions of Cuidad Del Este.

The Itaipu Dam is a joint venture between Paraguay and Brazil, and provides 80% of power to Paraguay. The dam is immense and was constructed very quickly once the treaty between the two countries was signed. Apparently the pace of building was the same as constructing a 20 story building every 55 minutes. A visit to the dam is free and includes a video then a 45 minute bus tour. 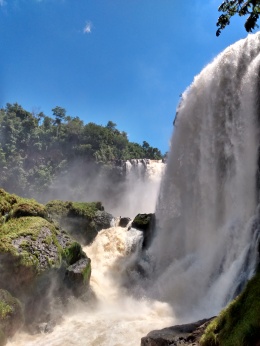 The Saltos de Monday waterfalls are located in a small park to the south of the city. They are very impressive when viewed from the top but even more so when you pay an additional 20,000 Guarani to take a glass elevator to their base. There’s a small restaurant overlooking the falls where we enjoyed a cold beer. It’s expensive to get in (around US10) when compared to Iguazu Falls but still worth a visit.

The Tres Fronteras monument is a little further on from the falls. This is at an intersection on the Parana river, from where you can see Brazil and Argentina while standing in Paraguay. There are similar monuments visible across the water in the other two countries, each painted in the national colours.

The capital city of Paraguay is Asuncion, located in the west of the country on the Paraguay river. The historical centre is the perfect size for a self guided walking tour to admire its neo-classical palace, government buildings and city squares. Read my post about our walking tour of Asunción here. 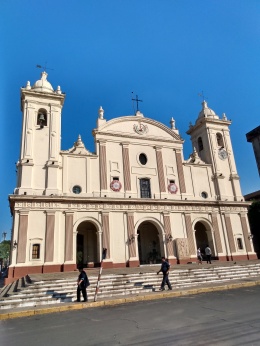 Asunción, the capital city of Paraguay

From the palace a side road leads down to the Costanera, the city beach, which for a land-locked country is quite impressive. A few families were swimming while professional-looking rowers passed by and a waterskier churned up the water further out.

Rows of bicycles were for hire and vendors sold cold drinks and Terere, the national drink of Paraguay. Every Paraguayan we see is carrying a leather bound thermos of ice water, with a stainless steel cup and straw.

We definitely weren’t going to pass up the opportunity to try it for ourselves. We paid 6,000 Guarani (a dollar) to receive our own thermos and a cup to share and sat on a bench to try our first taste of Terere.

Another five hour bus journey took us south to Encarnacion, the border town with Posadas, Argentina. The city was very clean with the usual wide avenues, but surprisingly the pavements were well maintained and the roads in good condition. It’s a popular destination for Argentinians on the weekend, and as such hotel prices on a Saturday night were sky-high. 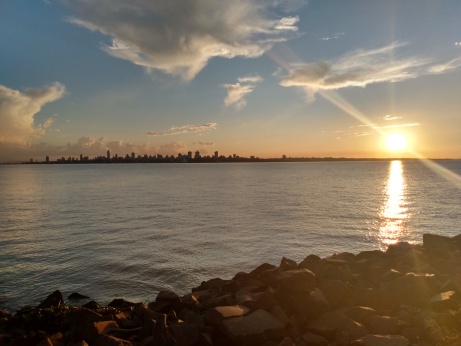 Sunset over Posadas, across the river in Argentina 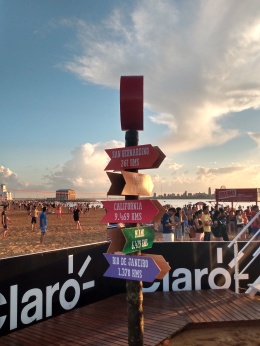 Walking down to the ‘beach’ on the Parana river, that separates the two countries, we could have been in any Spanish seaside town. A beach stage with dancers and a DJ entertained a small crowd, sunloungers filled the sand under brightly coloured parasols, the water was full of swimmers and the promenade was a swarm of families walking, buying ice creams and passing the time.

Our plan here was to visit the Jesuit ruins at Trinidad, about thirty minutes out of town. The Jesuits are an important part of South American history, being responsible for bringing Christianity, literacy and numeracy to indigenous peoples during the early years of colonisation. They were eventually expelled by the Spanish government as they were starting to exceed their powers.

This was a really quick trip through Paraguay for us. Most travel blogs I read about Paraguay agree that it lacks the must-see sights of other South American countries. Going further north, beyond Asuncion, we could also have visited a couple of national parks and eventually hit El Chaco, the underpopulated semi arid region near the Bolivian border.

I really enjoyed seeing Paraguay, particularly as it’s not as developed as Argentina or Brazil so it’s a little more ‘rough around the edges’.

A year ago today I was in El Salvador, admiring (and sometimes) climbing volcanoes. This one is Chaparrastique, visible from San Miguel town. It's one of 26 active volcanoes on the country. #backpackelsalvador #travelelsalvador #elsalvadortravel #sanmiguelelsalvador #chaparrastique #chaparrastiquevolcano #ringoffire #volcano #travelcentralamerica #backpackcentralamerica #wanderlust #traveltuesday #traveltheworld #solotravel #torgoestravellingagain
Cycling home at sunset from the beach, surrounded by birds, cornfields and the setting sun is pretty amazing. I'm enjoying my #workawayinfo in Uruguay - two weeks volunteering with an expat couple from Chicago on their 9 acre property. Check out my blog (link in bio) for tales of travelling in Uruguay, Paraguay and Argentina. #uruguaytravel #sunset #beachlife #dontstoptraveling #solofemaletraveler #volunteerandtravel #backpacksouthamerica #wanderlust #torgoestravellingagain
Uruguay definitely make good beer! Nothing like a nice cold beer after an afternoon of mowing the lawn. Even if I did have to cycle 10km round trip to buy it! I'm really enjoying my two week volunteering stay in Uruguay. Workaway is such a great website for backpackers to find local families or communities to volunteer with for short periods. Only ten days left of my South America trip then it's back home to get ready for the Tran-Siberian Train trip to Mongolia! #dunkelbeer #coldbeer #relax #uruguaytravel #backpackinguruguay #backpacksouthamerica #cheekybeer #workawayinfo #dontstoptraveling #torgoestravellingagain #volunteerandtravel
Statue of Peace in Plaza Cagancha in Montevideo. This was the first public monument, inaugurated in 1867. I couldn't resist a quick snapshot as I headed to Independence Square to join a free walking tour of the old town of Montevideo, Uruguays capital. Have a look at my Uruguayan adventures so far on my travel blog http://torgoestravellingagain.home.blog #torgoestravellingagain #uruguaytravel #uruguay #montevideo #curiosofreetour #travelsouthamerica #backpackinguruguay #solofemaletraveler #solotravel #dontstoptraveling
The view from inside the cross on Uruguays third highest peak. Only 40 minutes to the top but what fantastic views! This little hill outside Piriapolis was definitely worth a visit. I'm loving my week long trip along Uruguays stunning coastline. #uruguaytravel #backpackinguruguay #piriapolis #cerropandeazucar #uruguay #backpacksouthamerica #hiking #wanderlust #solofemaletraveler #solotravel #torgoestravellingagain
A great day trip from Punta del Diablo, cycling along sandy paths through nearby Santa Teresa national park. Stunning beaches, a fortress on the hill, botanical gardens... I think I cycled every single road and path in the park! #puntadeldiablo #backpackinguruguay #traveluruguay #uruguaytravel #santateresauruguay #wanderlust #southamerica #backpacksouthamerica #torgoestravellingagain #solofemaletravel #solotravel #uruguaybeaches #uruguaycoast
Follow TOR GOES TRAVELLING AGAIN on WordPress.com