A day tour along the mountain road to Puente de Inca and Christ the Redeemer statue high above the Argentina-Chile border.

From 750m above sea level in Mendoza to 4,000m above sea level at the Christ the Redeemer statue, this day trip from Mendoza was a highlight for me. We decided we didn’t have enough time to head to Salta in the north of Argentina, home of the infamous Rainbow Mountains, so the mountains near Mendoza were the next best thing.

We booked a tour with El Cristo Tur, a small tour agency, just off the main Independencia square in central Mendoza. The ten hour trip follows Highway 7, which is the main Buenos Aires to Santiago De Chile artery. Trucks from all over South America follow this Atlantic Ocean to Pacific Ocean route, sometimes waiting for several days in the winters on the highest passes while the snow clears.

Luckily we were in Mendoza at the height of summer, giving us a good chance to get all the way to the Christ the Redeemer statue, which stands high above the border up a tortuous 8km dirt track. It’s only open a few weeks of the year, and even the day before we did our tour it was snowing at the border making the road treacherous and impassable, so we counted ourselves lucky when we made it to the top.

After an 8am pickup from our hostel, we boarded a small minibus full of South American backpackers. We were the only English speakers so we were relieved that Pablo our guide sat us at front next to him and gave us the English translation after the Spanish.  He was so knowledgeable I felt at times like I was on a geography school trip! 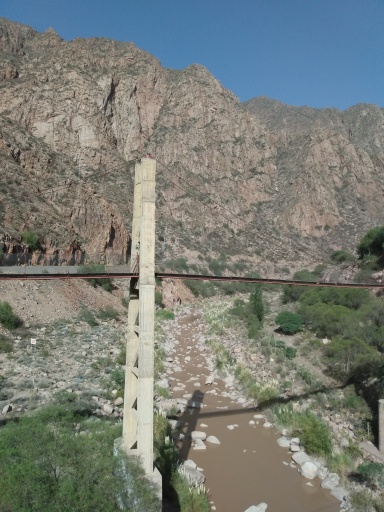 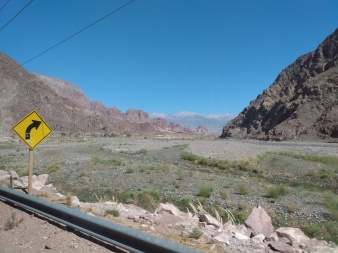 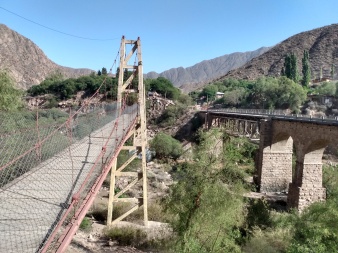 As we left the city, the landscape very quickly became desert, with nothing but haze ahead and an occasional glimpse of a snow-capped mountain. We passed a few scattered houses, some little more than shacks, amidst the low lying bush. A few horses grazing were the only animals. Later as we climbed a thousand feet or so the haze cleared and we were surrounded by stunning red, green, black and brown colours that got more and more dramatic as we neared the Chile border.

Mendoza, a large university town, receives only around 150- 300mm of rainfall per year. This means they are heavily dependent on the glacier run-offs from the mountains we were driving through. The government controls the water, releasing it to different regions at different times. This explains the numerous aquifers, or concrete water channels, we’d seen in Mendoza.

We stopped first at Puente Colgante, a swing bridge high above the Mendoza River. This was an acclimatisation stop said Pablo, as we were going to be climbing over 3,000 feet on the tour.

The wooden pedestrian bridge was built in 1952. We hopped off for a walk along the narrow rickety structure with great views of the mountains. Below is Cacheuta thermal spa, a popular day trip from Mendoza, costing around £5 to relax in various hot pools and enjoy a craft beer or two.

Potrerillos dam is 14 km long and one of six in the area. It’s the site of an international kite surfing competition in August when the wind gets up. At this time of year though it was very calm and we saw a few yachts moored up, with kayaks and stand up paddle boards for hire. 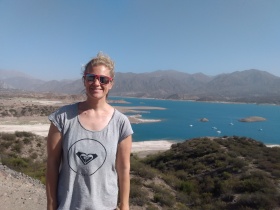 Ah, so fresh faced now we’re out of the city 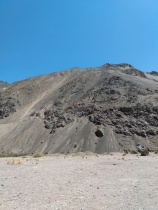 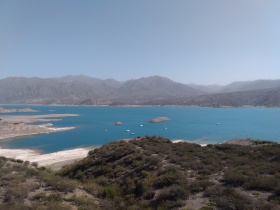 Swimming is banned and the yachts are not allowed to use their motors – all in the interest of keeping the water as clean as possible. There was no movement on the lake itself as we watched from a viewing point but plenty of other motorists had stopped with us to stretch their legs and take s couple of photos.

By the time we reached Uspallata, we had climbed to 2,000 feet. The road along the way had settled into a pattern. At all times both the river or the old train tracks were on either the left or right of us, with mountains soaring high above us.

Apparently Charles Darwin walked here from Chile and sent a letter home to his professor exclaiming over the beautiful colours. He figured the whole area was once covered in water before tectonic plates shifting created the mountain range.

The rainbow colours of the mountain range comes from a range of minerals – red for iron, green for copper and yellow for sulphur.

We were lucky to see a few guanacos grazing by the river. I hadn’t realised that guanacos are the wild version of the llama – llamas were apparently domesticated to use as pack animals. The guanaco’s beige coats help them blend perfectly with their environment to avoid detection but they can also run up to 40 miles per hour.  I guess this is to escape their main predator – the puma.

We had a quick coffee stop in Uspallata, an army town of 5,000 soldiers and their families. Due to its proximity to the Chilean border, we passed several checkpoints and military encampments.  The town, despite being surrounded by arid land, is protected from the infamous la Zonda winds by swaying poplar trees and manages to grow a variety of vegetables.

Thirteen tunnels later and a whole lot of rainbow coloured mountains and we were at the Inca bridge. To my surprise, this isn’t in fact an ancient bridge built by the Incas but a naturally occurring phenomena resulting from calcification. 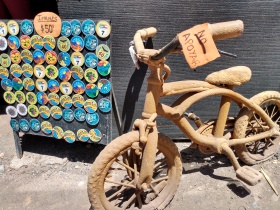 What’s happened to this bike?! 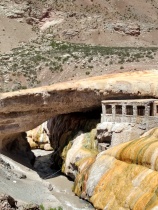 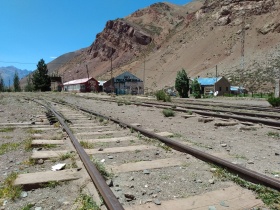 The Incas however did travel as far as Mendoza from Peru. The Cordón Frontal mountains of the Andes was likely the furthest south they travelled. Tambos or stone shelters have been found along the route, proving their vast exploration of South America.

Standing at the viewing platform across from the Inca Bridge we were captivated by the colours on show.  The mineral rich waters from the hot springs have created a colourful rock formation of oranges, yellows and browns. Anything placed under the waters becomes coated in yellow, acquiring a petrified look. At the stalls surrounding the lookout point were examples of different items placed in the water, from shoes to bicycles!

From the viewpoint we could see across to the old Hotel Puente del Inca, which was built in 1925. The hotel is now off limits but until recently tourists could cross the bridge and visit its ruins.

After an all too brief stop at the bridge we were off again to Aconcagua national park. Aconcagua, which means guardian of the sun in Quechua, is known as the roof or ‘techo’ of the Americas. At 6962m it takes up to 21 days to hike to the peak with numerous stops for acclimatisation. Amazingly there’s also a world record to run the peak – in 9 hours and 13 hours respectively. 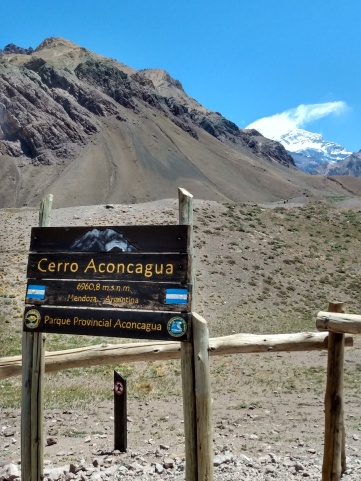 Can you see the Roof of the Americas peeping out from the clouds? 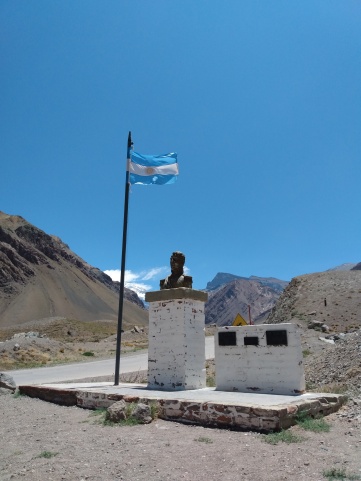 Visitors need a permit to enter the park, where there’s a range of hiking trails. But we were able to access a viewing point where we were treated to a rare perfect view of Aconcagua, peaking out from behind the clouds.

Stop six – Christ the Redeemer of the Andes statue

Around now we passed the starting point of the Mendoza River which is actually created by three smaller rivers. We had also passed Argentinian customs and were in the no-mans land between the two borders. Sadly we didn’t get another stamp in our passports as we weren’t going to be venturing past Chilean customs. 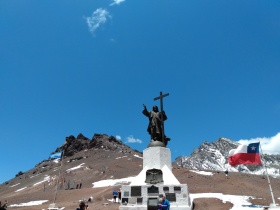 Christ the Redeemer representing peace between Chile and Argentina 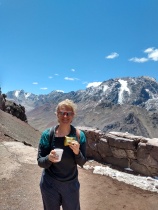 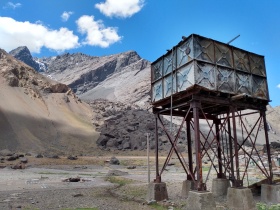 At Las Cuevas a tiny border town created by Eva and Colonel Peron, we began the highlight of the day. The 8km dirt track to 4,000 feet started at the Las Cuevas archway and finished at the Christ the Redeemer statue. The statue was put in place to honour the peaceful relations achieved between Chile and Argentina after much warring about the location of the border. The 7m high bronze statue on a 6m granite plinth was moved to the bottom of the hill by train in 1904, then carried up the hill by mules.

While the rest of our group were playing in the snow at the top, hugely overexcited to see it, we headed for one of the many shacks selling hot chocolate and alfajadores. These dulce de leche filled chocolate biscuits are the nation’s favourite biscuit, filling the stands at kiosks and served at all times of day with coffee. Every cafe advertises ‘cafe (coffee) con alfajadores’ or media lunes (sweet dense croissant shaped pastries). And if you haven’t heard of dulce de leche, the Argentinian favourite food group, have a look at my post here.

By now it was 3pm and time for our last stop – lunch. Having been on the bus for seven hours (!!) with just short photo opps, we opted to skip lunch and have a walk instead. We scrambled up the slope to an old travellers resthouse, dating from the 1800s and explored the old train tracks in Las Cuevas.

Afterwards it was a straight three hour trip back to Mendoza along the same route. I kept my eyes open for condors, which Pablo said nested on the highest crests of the mountains, as well as the elusive guanaco’s. Even on the return journey the rainbow colours of the mountains hadn’t lost their allure.