Lake Baikal is the world’s largest lake and completely freezes over in winter, creating a playground for locals and tourists alike

We arrived into Irkutsk at 8.24am after fifty-six hours on the train from Yekaterinburg. That was three nights and two days. It sounds like a long time but actually the time passed really quickly.

I think it’s something to do with the relaxing motion of the train – it just lulls me into a comatose state. I stood for hours in the corridor watching the unchanging scenery and listening to podcasts.

Planning our Trans Mongolia train journey independently has been really easy. From visas to train tickets to deciding where to break our journey across Russia has been a breeze. However, I’d made the decision to book a tour guide to show us Lake Baikal, thinking we’d see a lot more in a day if we had a car. Irkutsk, where the train station is, is actually 70km from the lake itself.

There’s a regular shared minivan that plies the route to lakeside town Listvyanka but I was hoping we’d see more on one day with a guide. I’ve never booked a private tour before and I’ve had limited experience even with group tours, so this was to be very new for me.

Ekaterina or Kate, arrived dead on time at 10am and off we went to the lake. She had a beat up old car with a massive crack across the windscreen, definitely not what I was expecting!

Our first stop was the Talsty open-air museum of Siberian traditional buildings. It’s a large site on the side of the river Angara, the only river to flow out of the lake. Original wooden buildings from villages due to be flooded for the installation of a hydro-electric dam were relocated here. There’s also a recreation of a 17th century fortress. 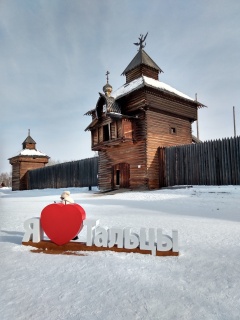 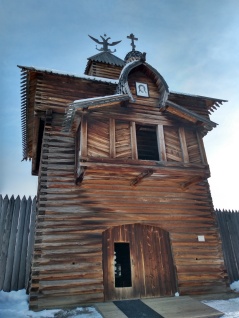 The fortress at Talsty open air museum in Listvyanka

In an attempt to conquer Siberia and its many warring tribes, Moscow sent Cossack armies to the east to build Ostrogs or fortresses and winter outposts at strategic locations. An important income was the fur trade, with the newly arrived Russian rulers collecting furs from local tribes as tribute. Later on, a big marketing strategy began to attempt to colonise Siberia, with peasant families encouraged to migrate from the West.

Down on the lakefront we parked outside the fish market, full of souvenir stalls and smoked fish sellers. 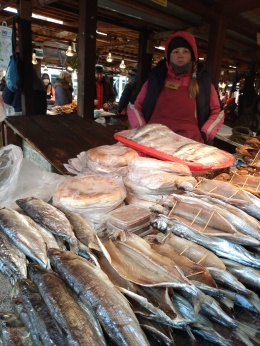 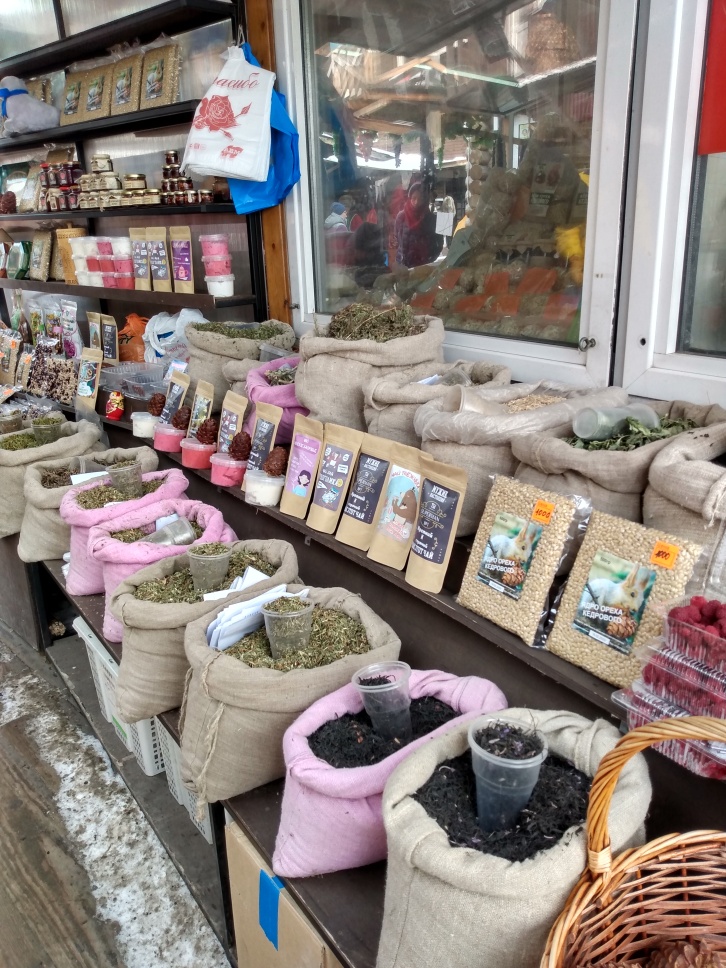 Kate helped us bargain for a smoked Omul fish each, a white fish endemic to Lake Baikal. We took them into a small cafe where we bought sugary lemon tea, salads and bread and enjoyed a delicious picnic lunch.

The lake was full of locals enjoying their Saturday. There were hovercrafts doing joyrides, vintage motorbikes and quad bikes for hire (yes, to ride on the ice!) and families walking or skating. 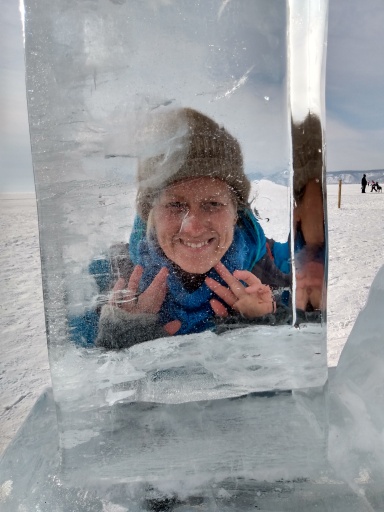 Frolicking on the deepest lake in the world

We walked for a while enjoying the novelty of  being on 60cm or so of frozen ice. There was another tour option, to be dropped off on the other side of the lake and enjoy a few hours trek back across to Listvyanka. I would have loved this option, purely just for bragging rights! I definitely need to do another Russia trip – there’s so much to see and do.

In February when the ice is at its most stable there’s even an official snow road, allowing cars to cross the ice. Kate told us this is really useful for families living at the furthest ends of the lake where there’s no roads. In summer they’d have to cross the lake by boat.

Taking the chairlift to a fantastic viewpoint high above Lake Baikal

Our last activity of the day was a chairlift ride up Cherskogo mountain. Unfortunately it wasn’t to snowboard, although I got major envy watching the local kids practising their moves. It’s been too long since I was on a snowboard.

At the top it was a short walk to a stunning viewpoint, looking out over the lake and the mouth of the Ankara river.

Colourful ribbons at the viewpoint over Lake Baikal

There’s a local tradition to bring a ribbon to tie to the fence, which creates a colourful scene at the top, as well as creating a fantastic photo!

Next stop , a mere eight hours by train, is Ulan Ude, our last stop in Russia. Then we’re crossing the border on a night train to Mongolia. We’ll go to sleep in Russia but wake up in Mongolia!

Wondering how to plan a Trans Mongolia or Trans Siberian train journey? It’s easy! Have a look at my blog post on How to Plan a Train Journey across Russia Independently.