It’s no hardship being trapped for seven days in the beautiful surroundings of Tsetserleg in Arkhangai aimag in Mongolia.

I’d managed to escape Ulaanbaatar just before a new seven day travel ban came into force, after the first confirmed coronovirus case in Mongolia was announced.

Luckily, Tsetserleg is the perfect place to be isolated, with numerous hiking and mountain biking opportunities. Yes, I was worried about Covid 19 hitting Mongolia and whether I’d be able to get out of the country at end of my trip but I was also conscious that this might be my last chance to travel and I wanted to make the most of it.

So, on day one I shot out the door of Fairfield Guesthouse into the countryside for a four hour hike. I’d found the hike on the comprehensive guesthouse website, detailing all the wonderful outdoorsy things you can do in the area.

I had to do a fair bit of Googling first to understand how to use the KML file provided. Er, what even is a KML file?!

Essentially, if you’re a technophobe like me, a KML file is a way of expressing geographic data and can be used to overlay a walking route onto Google My Maps or other mapping software. I used Maps Me because My Maps apparently doesn’t work offline.

So step one was to download the Maps Me app, step two was to download a map of Mongolia into Maps Me, step three was to send an email to myself containing the KML file from the Fairfield website and step four was to open the attachment which automatically saves it into Map Me. And voila, I had an offline walking trail that I could use GPS to follow.

1. Head away from the guesthouse and straight up through the ger community to the rocky crags and power mast on the skyline.

At the top I had a fantastic view back over town. Mongolian towns are pretty different to other countries. The centre of town will contain large concrete buildings with paved roads but on the edge of town are the ger communities. Everyone seems to have a square plot of land surrounded by a wooden fence, home to a ger and a few wooden buildings. The toilet is often outside in a metal shed and of the ‘long drop’ variety.  Water us collected from a communal standpipe or the nearest river. Unpaved roads segment the plots in a vague, orderly grid system.

2. Above the brightly coloured roofs of the ger community, keep left under the rocky crags, following a vehicle dirt track. When it forks, keep to the right heading higher up.

A random place to find this shell of a car

What a great tree!

I passed a lone tree on my right which looked quite majestic in its setting, followed by a bare metal husk of a car.  What happened to the rest of the car, I wonder?

3. Don’t follow the track that descends to the  valley. Veer slightly left, still on a vehicle dirt path.

Stunning views from the top!

The views to the east opened up here, revealing stunning landscape.  I soon came across an ovoo, or pyramid of sacred stones, topped with blue scarves and offerings.

Buddhist scarves come in five different colours but in Mongolia blue is the most popular, being for the sky spirit Tengri. I circled the ovoo the customary three times and added a couple of stones to the pile as an offering and for good luck along my hike.

4. The path now narrows to a pedestrian track and become very rocky. Keep following the path, with fantastic views below you, until you reach the first ridge.

Yaks on the path!

Ahead of me now, over the ridge, was a beautiful scene. Yak grazed peacefully on a grassy pasture dotted with trees. The only sounds were of a nomad in the valley below herding his cattle out of his compound for the days grazing further up river.

I was about an hour into the hike now and loving every minute. It felt so good to be active after a week in the back of a Russian minivan trundling around the Gobi desert. Have a look here to find out what it’s like to do a seven day Gobi desert tour in the snow!

5. There’s a small climb out of the pasture up to a rocky outcrop. 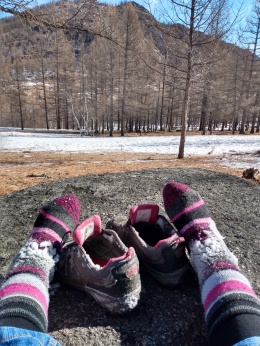 It was knee deep snow!

I had a small break here preparing myself for a steep descent through the snow that had appeared as I moved around the mountainside into shadow. A large pile of tree branches had a blue scarf tied to the top – I guess anything can become an ovoo?!

6. Descend a steep path through the trees to the valley floor.

I had to keep checking Maps Me and the GPS for guidance, as the path was covered in snow. I was veering wildly off-route through kneehigh snow but at least I knew I was heading in the right direction! At the bottom I stopped on a large flat rock to brush the ice crystals from my ankles – I’m so thankful for my kneehigh thermal socks.

7. Leaving the trees, follow the well-defined path through the grazing pasture, keeping the river to the right.

The beautiful colours of the frozen water caught my attention. Water expands when it freezes so these large trees looked like they were growing straight out of the river. I expect it’s just a narrow stream in summer.

I followed the ice sheets for a while marvelling at the colours before realising I’d gone too far and needed to scramble up a steep slope to regain the path that had forked left to start ascending the hill.

8. A very steep and long climb begins now, following a well trodden cattle path up through the treeline to the ridge high above. Keep just inside the treeline on the right hand side.

Despite the snow, I could still see the path as it was well trampled by cattle and a motorbike or two. It still amazes me watching the way the Mongolians wrestle their motorbikes up virtually sheer cliff faces.

I zigzagged my way up the hillside, admiring the rock formations high above me on my right and swearing every time I ended up knee deep in snow again.

9. After a very hard climb, the reward is great views both east and west from the top of ridge.

The highest point of my four hour Tsetserleg day hike

Two hours had passed now, so I figured I was halfway through the hike. Definitely time for lunch! I found shelter from the breeze by another rocky outcrop and dug out my tomatoes, cucumbers and bread.

There’s so little fresh vegetables in Mongolian supermarkets but for some reason in Ulaanbaatar supermarkets I found cucumbers, cherry tomatoes and small red and green peppers, all shrink-wrapped to within an inch of their life.

I’d found this protein-rich German bread in an expensive supermarket in Ulaanbaatar – they had a packet of vegetable crisps for £8!! Thankfully the bread was a more reasonable price.

10. The path now descends gradually through the trees, as it follows the mountain around to the south. 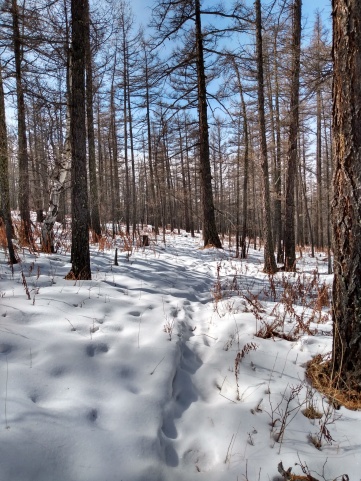 A snowy descent on Tsetserleg hike

Tor on the rocks!

As I emerged from the trees I could see the valley far below me and a track heading back into town. I was now on the other side of the mountains I’d circled around from Tsetserleg.

I clambered onto some massive rocks and played around with my phone camera, putting it on timer, trying to get a view of me standing on the rocks opposite. Then I watched with horror as my phone slowly toppled and slid down the rocks landing in a crevice. Definitely payback for my selfie vanity! I eventually retrieved it unharmed (both me and the phone).

11. Now it’s time to scramble down, any old way, to hit the track you can see below. This is the ‘off-track section’ mentioned in the KML file.

It was really steep here, so I zigzagged my way down, following narrow barely-there cattle tracks.

12. If you made it down safely, head across the grazing pasture to join the walking trail going left. Keep following it as it descends through a boulder strewn hillside.

Scramble down anyway you can! 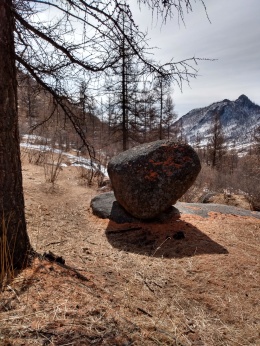 This was great landscape, with massive boulders perched on the edge of the hillside looking as if they were going to start rolling off any minute.

13. The track now widens out into a vehicle trail and soon arrives at a tourist camp. Once past here, stay left above the power lines, to detour to a small stupa and prayer wheel. Then rejoin the track which goes directly back to town and Fairfield Guesthouse.

Stupa and prayer wheel outside Tsetserleg 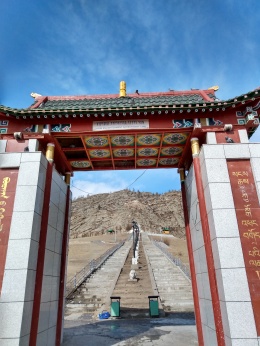 Instead of going straight back to my guesthouse I detoured to the Divine Enlightenment Achievement Lane, which is just above the Buyandelgerüülekh Khiid monastery on the edge of town. The ‘lane’ is a staircase up the hillside passing the twelve animal signs of the Buddhist zodiac. The Lunar New Year has just been celebrated here and 2020 is the year of the rat, representing a new cycle of the zodiac. I’m a monkey (1980) so I added a stone to his lap for luck.

Six days to go until the travel restrictions are lifted – can I find enough to do in Tseterleg? I’m pretty sure I will. I just about managed in Ulaanbaatar and literally every tourist site there was shut!

Read here about how to amuse yourself in Ulaanbaatar when literally everything is closed for a coronovirus lockdown. Or for a far more interesting read and some fantastic photos, have a look at my blog post about my fantastic seven day Gobi tour, which I’m giving the great honour of placing in my top ten travel experiences.