A highlight on my seven day Uruguay itinerary hopping from town to town along its amazing coastline was my cycle day trip to the Santa Teresa national park. I’d travelled 467 km along Uruguay’s stunning coastline since leaving Colonia del Sacremento, my entry point to the country after crossing the River Plata from Buenos Aires.

Punta del Diablo is one of the many Uruguayan beach towns that swell in population during the two months summer season. Made up of sandy lanes on a vague grid system, each property stands in its own small lot and no two buildings are the same.

From thatched cottages to hand built cabanas, from concrete monstrosities to ancient rusting converted school buses, just wandering the streets was a tourist attraction in itself.

I’d come to Punta del Diablo specifically to hire a bicycle and cycle out to nearby Parque National Santa Teresa, an army administered park with shaded tracks, an ancient fortress and beautiful beaches.

Although my hostel, Hostel El Indio, didn’t rent bicycles Frederico recommended Mar del Fondo hostel just two blocks away. The bikes here were in good condition, came with a lock and cost 500 pesos per day (about £10 – Uruguay is not the cheapest!).

My trusty steed for the day

The start of the climb up from Plata Grande

Although Google maps doesn’t show a continuous road from Punta del Diablo to the park, it’s possible to get through by bicycle with just a short bit of pushing through a sandy path. I was gratefuI I didn’t have to cycle all the way out of town and then along the highway!

This beautiful beach was the first stop on my way to Santa Teresa national park. Just a short ride from Punta del Diablo, this beach is deserted compared to the town beaches with a small restaurant and a lone surf hire stall. 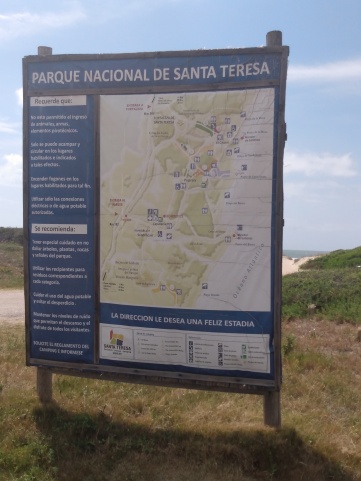 Campsites I passed along the way

The sandy lane ran parallel to the beach for a short while then a giant map signalled the start of the park.

There’s apparently 1,000 camping spots in the park, nestled in different groups under the trees. In each area there are toilets and showers and a small kiosk selling the essentials.

The Uruguayans take their camping seriously and I saw mini camp kitchens set up under tarpaulins, hammocks slung through the trees and even kids swings tied up to nearby branches.

After a steep climb through the trees away from the beach, I saw a sign to Mirador Mangrullo. 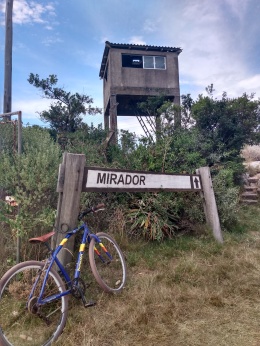 A lookout tower in the park

View from the lookout tower

Campsites I passed along the way

Luckily the route wasn’t too much further uphill and I soon arrived at a small lookout tower, giving a good view over the park.

An unexpected bonus was these pretty greenhouse and rose gardens – a surprise to me as I hadn’t realised they were here. 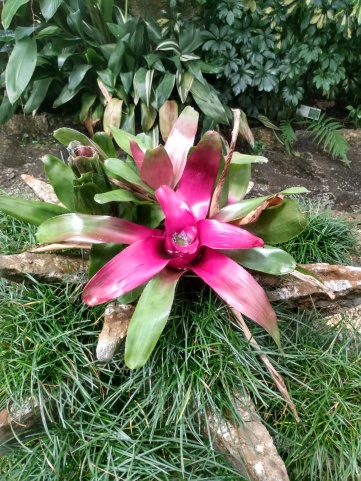 Statue outside the fortress

The entrance to Santa Teresa Fortress

A  short walk took me to a bird hide overlooking the lagoon, where there were several birds to-ing and fro-ing and some capybaras grazing in th distance. Where are my binoculars when I need them?

5km from the administration area and through several shaded campsites,band I eventually arrived at the fortress. Again, another surprise – it was open! Of course I’d read the winter times (closed Mondays and Tuesdays) but it’s apparently open everyday in summer.

It was 50 pesos to enter (a pound) and inside there’s several buildings to explore from the small chapel to the armoury and gunpowder room. It dates to 1762 and construction was started by the Portuguese, but by 1777 the Spanish were in charge again and completed the current Fortress.

A straight run downhill from the fortress led me straight to Playa de la Moza and surprise surprise some giant letters. These are a common theme in Central America as I discovered on my travels last year (have a look at some of my posts about my trip from El Salvador to Belize here) and apparently also popular in South America. 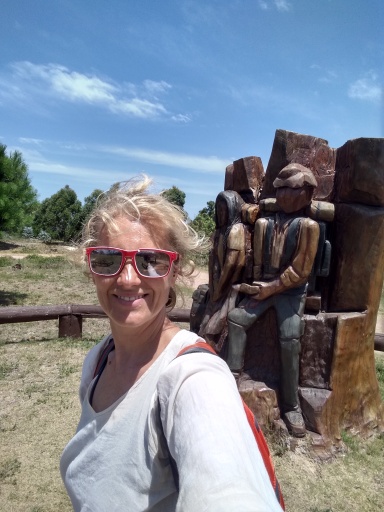 The entrance to Santa Teresa Fortress 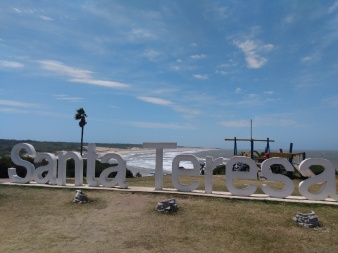 I also found a sculpted wooden monument to backpackers and stopped to say hello to a very friendly deer, who was eating out of someone’s hand.

Then I followed another sandy road to yet another beautiful beach, Playa El Barco. I decided it was definitely lunchtime and settled down to read for a bit and eat my rice salad (leftovers from last night – my top travel tip, always bring a Tupperware and travel cutlery!).

It was hard to drag myself away from the beach but it was getting on for 4pm and I still had a few stops left. I continued back to the administration area, completing my circle through the park, then retraced my steps towards Playa Grande. Halfway down the hill I turned off to check out the Sendero Interpretacion. 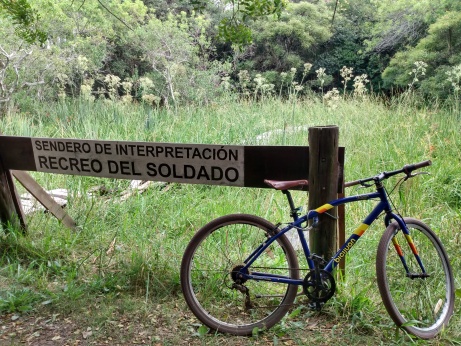 The start of the trail!

I was expecting it to be a walking trail with information boards, but instead it was a walking trail leading through the woods up to the Mirador I’d cycled to that morning. It was a lovely walk though, through the trees and bushes and from one section there was a good view over the treetops.

And a final walk along Playa Grande as the sun set

Finally I was back at Playa Grande where I couldn’t resist another walk along the waters edge as the sun began its descent.